"Ears" a listing of our previous Corn Palace Festival Entertainment!

All tickets will have taxes and fees added at checkout.  Buy one GA tickets for any 2-Shows for $50(only available at box office window or on the phone) Doors open 1-hour prior to the show, all shows will have an opening act to be named.

Thursday August 25th - 7 pm Randy Houser - Party Pit - $60, Reserved Seated $45, GA Standing or Seated - $35 - Randy Houser racked up three consecutive No. 1 hits with his album, How Country Feels, plus earned critical acclaim for his powerful delivery of the Top 5 smash and CMA Song of the Year-nominated "Like A Cowboy." Houser added a fourth No. 1 to his catalogue with “We Went” from his 2016 album. The opener at 7 pm will be Danica Michaels. Country singer/songwriter Danica Michaels grew up in the thriving city of Sioux Falls, South Dakota. Her passion for music transpired at an early age inspiring her to earn a college degree in Music. Danica has traveled extensively, nationally and internationally, on her music journey. She has performed a variety of music genres throughout her career, including Country, Blues, and Pop

Friday August 26th - 7:30 pm Russell Dickerson-Party Pit - $60, Reserved Seated $45, GA Standing or Seated - $35  - Russell Dickerson's “Yours” (christened “One of the hottest wedding songs of the year” by The Knot), the platinum “Blue Tacoma,” and “Every Little Thing.”  Attracting a fervent following on social media (fondly referred to as “RD Fam”), he launched his own YouTube show, “This Is Russ,” bringing viewers deeper into his world.  “Love You Like I Used To,” “Home Sweet,” and “Never Gets Old.”

Thomas Mac is an up-and-coming country artist you'll want to keep your eye on! After having a song, he wrote go viral on social media, he moved to Nashville, where he started catching the eye of people in the industry. He was offered his first record deal at the age of 20 and performed for the first time on The Grand Ole Opry stage that same year. Thomas has found a way to walk the line between modern and traditional country.  Today, Thomas has an enormous social media presence with millions of views and over 2 million followers on TikTok alone.

Saturday August 27th - 7:30 pm Night Ranger -Party Pit - $60, Reserved Seated $45, GA Standing or Seated $35. Heavy hitting rock legends, Night Ranger released their 12th studio album, "ATBPO” (which stands for And The Band Played On), an ode to making music during the covid era in late 2021. Their popularity is fueled by an impressive number of instantly recognizable hit singles and signature album tracks, including legendary titles such as "Sister Christian", "Don't Tell Me You Love Me", "When You Close Your Eyes", the anthemic "(You Can Still) Rock In America", along with "Sentimental Street", "Goodbye", "Sing Me Away", and "Four in the Morning".  Opening for Night Ranger is the Jimmy River Band.  Former resident Korrie Wenzel and band will take the stage at 7:30 pm to open this show.  They will move to the outdoor plaza for another set after the concert.

Sunday August 28th - 2 pm Music of Randy Travis -  Reserved Seated $40/$35, GA Seated $30. Country Music Hall of Fame member, Randy Travis will be closing out the exciting concert lineup for the 2022 festival on Sunday, August 28th at 2 pm. The Music of Randy Travis featuring vocalist James Dupree and special appearance by Country Music Hall of Fame member Randy Travis in Person . The show will consist of Dupré and the band performing all 16 of his iconic number ones including “On The Other Hand,” “Forever and Ever, Amen” , “Three Wooden Crosses"  also two never-before heard singles this summer, “One in a Row” and “Lead Me Home.”  Randy Travis will make a special appearance. 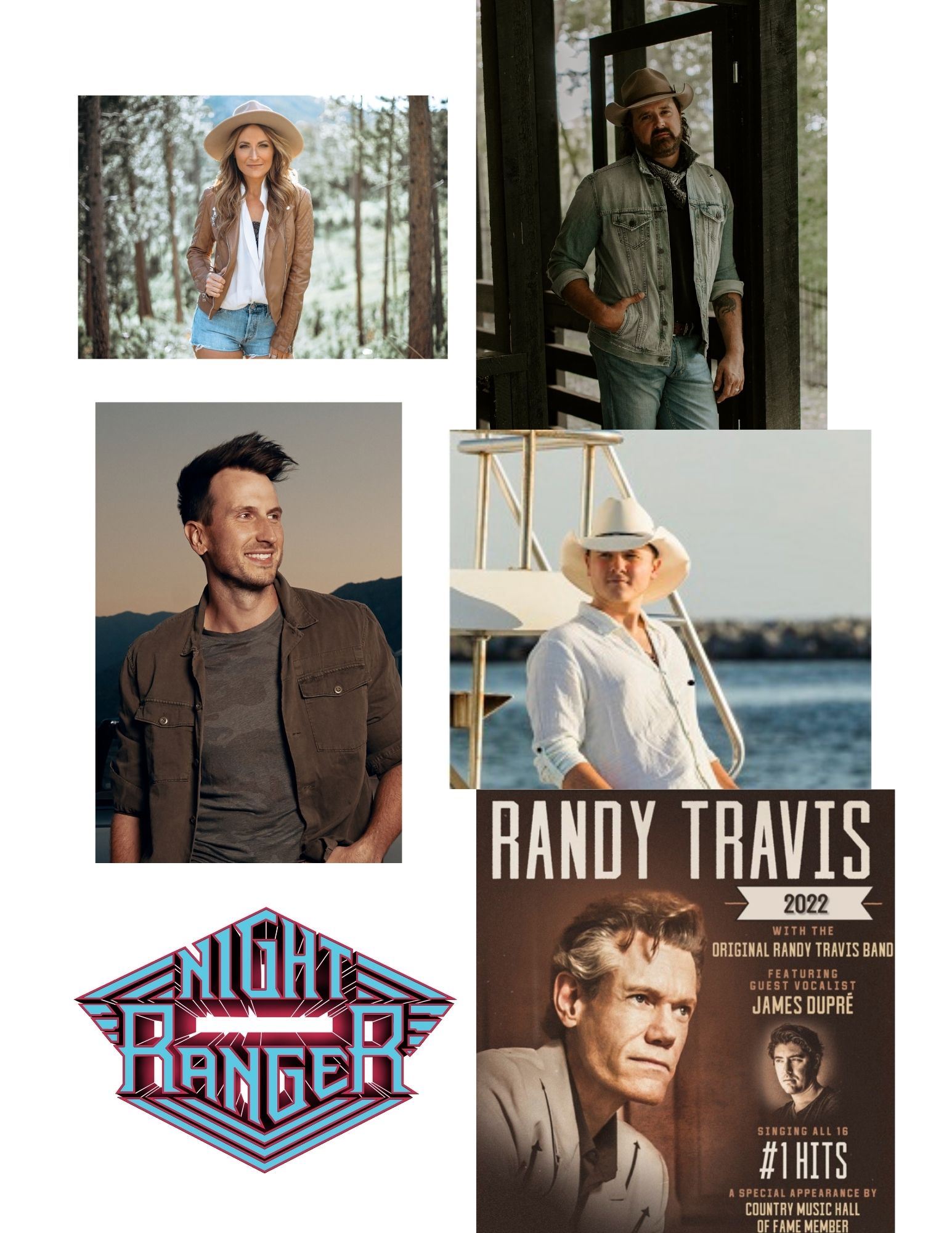 Buy Tickets
Find Us
Book an Event
Notify Me
Calendar
[]